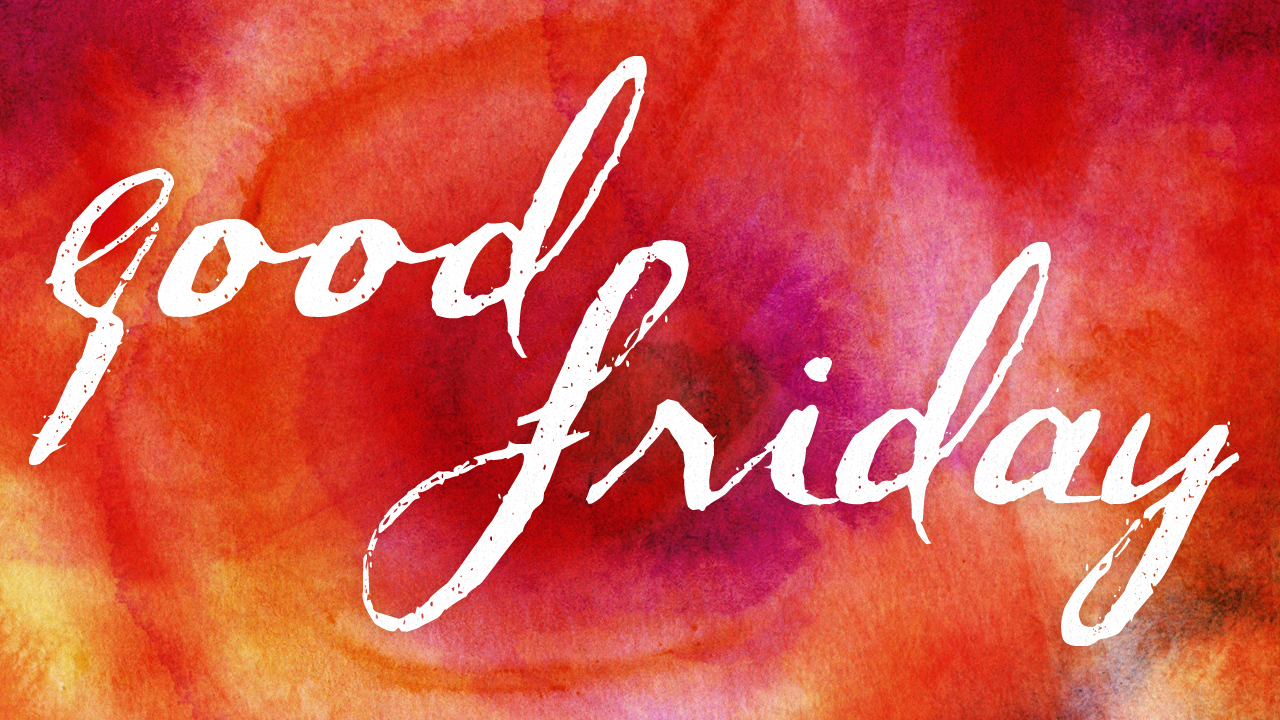 A few weeks ago I was with a family who was reminiscing about their mother’s death. Three daughters who in detail spoke of the night she died.

I thought about this experience when I started thinking about Good Friday and looking at the four Gospel narratives about Jesus’ last hours on the cross.

Did you know they are all different?

And while all four of them tell of Jesus’ final hours, it’s only Luke who tells us what Jesus said when he cried out so loudly.

“Father, into your hands I commit my spirit.”

And then, Luke says, Jesus breathed his last.

See, the phrase “into your hands I commit my spirit” was used by religious Jews every single day of their lives. It was the prayer they prayed every night, the last thing that left their lips before they closed their eyes, comforting and familiar words that led to rest.

I have this childhood memory that goes back as far as I can remember. I can remember my mother singing as she rocked whichever one of us was the baby to sleep.

I will always be able to recall that song and when I do, there is a peace that floods over me, and that feeling of safety.

It was the kind of thing Jesus was probably calling to mind as he cried out in a loud voice: “Father, into yours hands I commit my spirit.” And I have to say, to everyone standing there, it must have seemed totally out of place.

In the deepest moments of anguish, with doubt and grief and regret washing over everyone – not just Jesus – those words must have seemed strange.

Today, I tell you, I’m glad Luke remembered to tell us these words, because it seems to me that Jesus, bloody and gasping for air, gave us the most amazing gift when he spoke these words.

Yes, in the middle of the deepest human darkness we could ever experience, our Savior spoke firmly and forcefully – loudly, Luke says – these words of utter comfort and ultimately love. He spoke them in forceful defiance of the despair and hopelessness that haunted his final hours. He would not give in. He would not let despair be the final word.

There was nothing pretty about what Jesus went through.

All of his friends had just let him down; surely the memory of Judas’ kiss or Peter’s denial ran like a tape over and over in his mind. He’d just been forced to look straight into the face of gut-wrenching fear, and it scared him so badly that he sweated with utter anxiety.

He’d knelt in the garden alone, talking to God and begging. Please, could there be another way to walk through this? He’d hung on the cross and uttered – as Matthew and Mark report – his sinking suspicion that God had abandoned him and that he was all alone.

After these things…after all of these things, then, Jesus does the most incredible, faith-filled thing: he struggles to take in one last breath and calls out words of comfort and peace. These final words – Jesus cried them out, and when he did, he spoke defiant hope into dark despair.

On Aug. 14, 1982, Todd Weems was out on the town celebrating his 21st birthday. It was just after midnight when he left the restaurant to head home. As he was leaving, he noticed, out of the corner of his eye, a group of men beating a homeless man in an alley on the side of the restaurant. Without much thought, he ran over to try to help, and in the moments that followed it was Todd who was brutally murdered.

It’s a tragic story any way you tell it, but to make the aftermath harder, you should know that Todd’s mother, Ann Weems, is a prolific writer and noted theologian. Faced with the senseless pain of her son’s death, she spent night after sleepless night filled with anger at the God she’s served all her life, who, as far as she could see, had completely abandoned her to utter darkness. Out of this experience came her book “Psalms of Lament”, where she somehow found the courage to write these words.

“In the godforsaken, obscene quicksand of life,

there is a deafening alleluia

rising from the souls

of those who weep,

If you watch, you will see

the hand of God

putting the stars back in their skies

I don’t know just how Ann Weems summoned the courage to write these words of hope into the dark abyss of her situation. I think it might be possible that she remembered a Savior who had also suffered those feelings of betrayal and hopelessness and chose, instead of surrendering to the darkness, instead to defiantly place everything she was into the hands of God.

Me? I suspect I might have gotten stuck at “My God, my God, why have you forsaken me?” But on this day, I want to say, “Thank you, Luke, for reminding us that Jesus didn’t stay stuck.”

And as we stumble our way through this day and through the pain of our human lives, often unable to see through the darkness, we can take whatever is left of our lives and place it right into the hands of God, a revolutionary act of faith, indeed.

“Through the darkness be near me…”

“Keep me safe till morning light.”

“Into your hands I commit my spirit.”